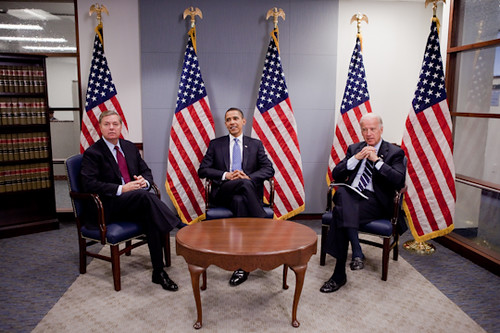 What’s all the nonsense about Obama struggling?

The man is 47, has a sharp mind that is suited to judgment of competing ideas, makes speeches at the level of John F. Kennedy and Ronald Reagan, has a sensibility that is not so populist as to be deluded, and not so elite as to have lost touch.  He has simultaneously minority and elite status and has a genuinely all-American work ethic and positive disposition.

He begins his presidency with 58 or 59 Democratic Senators (depending on when Al Franken stops telling jokes and shows up for work) and two popular moderate and less partisan Republicans from Maine, Olympia Snowe and Susan Collins, who are not likely to stand in filibuster against him.

In the House of Representatives, Democrats number 262 to the Republicans 178, which means the President can lose more than 40 Democrats and still pass his agenda in the House.

President Obama has spent the last two years invigorating public participation and activating Democrats to tune in and take a stand.

The choices before him are complex and the problems not easy to solve.  The President has shown in just three short weeks that he is not beholden to anyone.  Liberals are irritated by his centrist nominations.  Republicans challenged his stimulus bill and lost.  Obama demanded a fast response from congress and he got one.

His decisions may or may not solve the credit crisis, real estate market collapse, or spiraling recession, but he certainly is in command.  Franklin Roosevelt made many false steps working through the Great Depression.  In the end, his policies eased the pain, but it was the publicly financed industrial development during World War II that threw off the slump and earned the United States an economic rebirth.

So too Obama may have to readjust course as he evaluates the effect of his administration’s approach to economic difficulty and the country walks a tight-rope.  When he does, critics will attack his every misstep, but if there is any clarity to be gained from his first weeks in office, it is that he will retain command.  Anticipate that this President will respond actively, and until the next election, without gridlock tying his hands.

This entry was posted in politics, Uncategorized and tagged Barack Obama, Republicans. Bookmark the permalink.