Originally published on February 16, 2008, at http://www.care2.com/causes/politics/blog/barack-obama-on-abraham-lincol/ 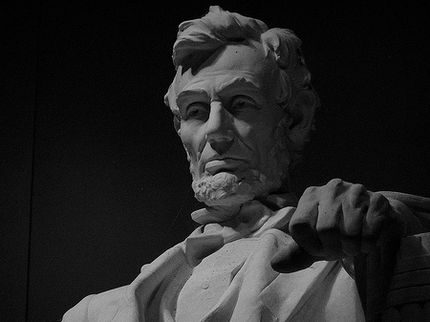 President Obama reflected recently on Abraham Lincoln at the 200th anniversary of Lincoln’s birth.  His remarks, and the fact that Obama has mentioned focusing on the 16th president in looking to the past, give some indication of how Mr. Obama sees the nation and the presidency:

“We will be remembered for what we choose to make of this moment, and when posterity looks back on our time, as we are looking back on Lincoln’s, I don’t want it said that we saw an economic crisis but did not stem it, that we saw our schools decline and our bridges crumble, but we did not rebuild them, that the world changed in the 21st century, but that America did not lead it, that we were consumed with small things, petty things, when we were called to do great things.”

“Instead, let them say that this generation, our generation of Americans rose to the moment and gave America a new birth of freedom and opportunity in our time.”

Clear themes of coming together, fairness, action in the face of challenges, and rising to the historical moment show that the current president is thinking about his and the nation’s choices in a historic context.

This may be rhetoric or it may be Obama’s belief that the financial crisis is a major historic event in line with the Great Depression, but he seems to be asking the people of the United States to move beyond competing political parties and social agendas to act together on common interests in education, infrastructure and leadership.

The rush to pass stimulus legislation did not bridge any partisan divides, but President Obama will have a chance at a more deliberate pace to gather together political leaders, parities and populace, going forward.

It may be worth remembering that Abraham Lincoln called the people of his time to make great personal sacrifice for the nation, and in honoring the fallen and leading the living he reminded Americans of the noble purpose of the American experiment:

“the great task remaining before us — that from these honored dead we take increased devotion to that cause for which they gave the last full measure of devotion — that we here highly resolve that these dead shall not have died in vain — that this nation, under God, shall have a new birth of freedom — and that government of the people, by the people, for the people, shall not perish from the earth.” (excerpted from Gettysburg Address)

This entry was posted in Barack Obama, politics and tagged lincoln, Obama. Bookmark the permalink.