Winning the Argument on Tax Cuts and Government Spending 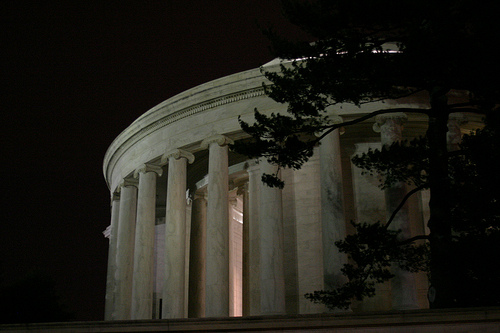 By Marc Seltzer; originally published at care2.com on December 5, 2010.

What is it about slogans like “no more taxes,” and “government spending is out of control” that are so appealing to the other ninety-eight percent of Americans?  The 98% don’t really pay all that much in taxes, and they recoup a substantial amount of what they do pay through their use of social programs such as Social Security, Medicare, Veteran’s benefits, welfare, public education, transportation, environmental protection and unemployment insurance, etc.

Liberal commentators often skip over this question and jump into the fray accusing Republicans of greed, manipulation and deception.  Rachel Maddow recently expressed concern that Democrats would compromise on the Bush tax cuts.  She railed against the Republicans’ consistent refusal to compromise and extolled Vermont Senator Bernie Sanders for blasting Republicans for cutting taxes on the wealthy at the same time as they complain about debt and deficits.

SANDERS: “We are now faced with the issue of what we do with the Bush tax cuts of 2001 and 2003, and if you can believe it, we have people here, many of my Republican colleagues who tell us, oh, I am so concerned with debt and deficits, I am terribly concerned with a trillion dollar national debt, terribly concerned, but wait a minute, its very important that we give, over a ten year period, 700 billion in tax breaks to the top 2 percent.”

“We talk about a lot of things on the floor of the Senate, but somehow we forget to talk about the reality of who is winning in this economy and who is losing, and it is very clear to anyone who spends two minutes studying the issue, the people on top are doing extraordinarily well at the same time as the middle class is collapsing and poverty is increasing.”

This is true, so why don’t Americans vote 98-2 in support of taxes and government spending?  Why don’t Democrats have more traction when they argue for raising taxes on the wealthy and spending money on social programs?

Could it be that Americans don’t feel good about taxes and government spending because they really are naturally wary of big government?  Remember that the nation was born of the fundamental principles that power corrupts and authority must be held in check.  Yet the size and scope of government today dwarfs any monarchy or authority that the founding fathers could even have imagined.  The British Empire of old doesn’t hold a candle to present day Washington.

This isn’t to say that Social Security and Medicare shouldn’t be revered and safeguarded.  But costly foreign wars and catastrophic financial mismanagement have caused more than the usual doubt or despair over government.

Anyone who argues in the public arena that taxes must be collected and spending authorized would do well to respect the public’s healthy skepticism. To speak to this concern is to talk about good management practices and improved efficiency; more persons served and better services with lower costs.  This doesn’t have to hide the difficult decisions about balancing budgets and taking care of our fellow citizens.  But it’s not enough to say the rich can afford to pay, or that Republicans want to cut spending on social programs, and think that you’ve won the argument.

Americans know that the breakdown in good government is in part because government’s very size and financial power have turned it into an unwieldy, unaccountable beast.  How the public regains control is not yet known, but those working to preserve the social safety net, should avoid collisions with the public’s genuine desire for government reform.

No Tea Party in Canada 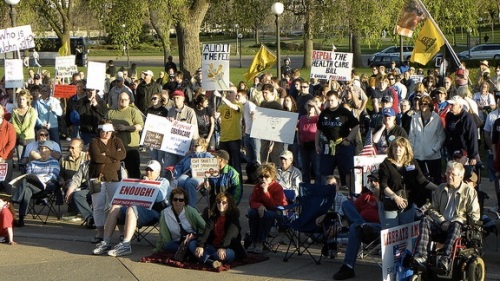 By Marc Seltzer; originally published at care2.com on October 13, 2010

. . .
Democrats seem bewildered by the strength of the Tea Party movement.  Powerful incumbent Senators such as Boxer (CA) and Reid (NV), and numerous House Reps in leadership positions find themselves in difficult contests. Republicans are poised to gain significant numbers in the legislative branch in November’s mid-terms election.

Fighting back, Democrats and their supporters have gone after Tea Party-Republican candidates, focusing on their oddities, inconsistencies, and lack of coherent policies.  Rachel Maddow, among others, has exposed the remarkably poor caliber of some candidates propelled by the Tea Party to victory in the Republican primaries.

Be that as it may, the legitimate complaint of the Tea Party movement has not been effectively dealt with by Democrats.  The root groundswell of anti-government energy comes from fear and anger about deficit spending and debt.

In Canada, governments of the past decade worked hard to erase the substantial deficits of the 1990s.  When the 2008 financial crisis arrived, Canada was able to face the recession with sound economic fundamentals.   Increased public spending in 2009 and 2010 again created deficits, but helped Canada recover nearly all the jobs lost in 2008.  Embarking on a new deficit spending program did not faze the public, and Canadian leaders are now talking about returning to surplus budgets in the next 7 years.

There is no tea party movement in Canada.  National health care, yes.  Major tax protests, no.

For all the things wrong with aspects of the Tea Party movement, from blaming the Obama administration for current ills to dredging up misguided social views, the truth is that the U.S. would have braved the recession far more effectively if it had had a budget surplus.

In not addressing this aspect of the financial health of the nation directly from the start, with a coherent long-term plan, the Democrats have allowed the opposition to bundle legitimate disapproval of the government’s budget outlook with generalized anger at banks, unemployment, the Bush administration, Congress, taxes, and government spending.

It’s working for Republicans so far, and if this election looks bleak, imagine Sarah Palin filling a stadium near you in 2012.

(Marc Seltzer has been on paternity leave after the birth of his daughter in June.  Marc can also be heard reviewing U.S. Supreme Court cases at SupremePodcast.com)

. .
The U.S. stock market took a wild ride Thursday as the DOW index of stocks fell 1,000 points at its lowest and ended the trading day down 347, or more than 3%.  The economic concerns of the day centered on the turmoil in Europe as Greece needs a bailout to avoid default on its public debt.  However, the Securities and Exchange Commission (SEC) is investigating unusual trading activity to determine whether mistakes or manipulation caused a rapid drop of stock prices shortly after 2:30 p.m.

The crisis in Europe is serious.  Greeks have been rioting for several days over the economic hardships that are being imposed, as the government seeks to rein in public spending and convince European nations that it will show fiscal discipline, if given a new loan package.  Skeptics believe that even with new loans and belt tightening, Greece will eventually have to restructure its debt.

However, Greece is a small nation and its economy is only a small fraction of Europe’s economic power.  The market’s concern is that Greece’s problems might also surface in larger European economies such as Portugal, Italy or Spain.  Not unlike the U.S. bailouts to financial institutions in 2008, European governments today are stepping in to stop Greece’s failure from spreading.

While the decline in Greece is in itself too small to negatively impact the U.S. economy, greater weakness in Europe could hurt U.S. export sales and overall confidence in the recovery.  On the other hand, the U.S. stock market has risen dramatically since the financial crisis abated.  It may simply have been due for a correction.

By Marc Seltzer; originally published on March 29, 2010 at care2.com

One aspect of President Obama’s health care reform legislation that has not received enough serious discussion is deficit reduction.  Despite claims that the legislation expands government, the non-partisan Congressional Budget Office (CBO) says that it will reduce the deficit by a significant amount over the next twenty years.

This has not stopped Republicans, such as Lindsey Graham, from announcing a campaign to “repeal and replace” the legislation.  What the Republicans have not said, is whether they would increase the deficit by such repeal, or find a way to match or improve upon the projected $130+ billion dollars in deficit reduction over first ten years and more than a trillion dollars in projected saving by 2030 contained in the Obama plan.  (Atul Gawande in the New Yorker gives some context)

It’s not hard to create popular legislation if it gives benefits that it does not pay for.  Remember that President Bush’s Medicare Prescription Drug benefit was popular, but was also a giveaway, increasing the deficit.  The harder part is to create legislation that lowers the deficit, without losing support among constituents, who like the idea of deficit reduction, but don’t want to see their own benefits taken away.

No matter what happens in November, President Obama would surely veto any attempts to repeal health care reform.  He may be open to improving upon current legislation, but he has promoted the “PayGo” (from pay-as-you-go) rule, which requires that new legislation not raise the deficit.  “PayGo” requires cuts in spending or increases in taxes to offset any new program spending.  “PayGo” led to surpluses in the Clinton presidency, and will again, so long as it is followed.  However, Republicans have no credibility on fiscal discipline.  They may run for office on a repeal platform, but will they propose alternatives to health care reform that cut the deficit?

Remember, repealing the current law would, in itself, raise the deficit, since Obama’s new legislation substantially lowers the deficit.

Republicans’ most appealing political argument, superficially, at least, against Obama’s health care reform, is that it takes money from Medicare.  Republicans claim it will bankrupt Medicare and hurt senior care.  Democrats refute these claims, arguing that the elimination of waste, fraud and abuse and the establishment of an independent panel to review Medicare spending will lower costs without cutting the quality of senior’s care.

An ongoing disagreement over doctor reimbursement rates may be another difficult challenge or an opportunity for creative problem solving, when it resurfaces in coming months or years.

It is no surprise that Republicans have come down on the side of spending more, and reassuring constituents, rather than bold action and fiscal responsibility.  But if Republicans are going to have any relevant part in the health-care debate going forward, they must be willing to offer potentially unpopular proposals that the CBO agrees will cut the deficit.  So far, Republicans have shown no appetite for the politically difficult task of cutting spending, not in Medicare, not in Social Security, and not in Defense.

President Obama has taken criticism for his stimulus spending.  But this was one-time emergency spending to stave off economic crisis, and the benefit of a rebounding economy should include increased tax revenues and a lowering of the deficit over time.  The President has since made it clear that he came to Washington to make the tough decisions, including long-term deficit reduction.  His health care reform triumph follows through on that promise.

For more on health care reform:  You’ve Got to Hand it To Them:  Obama, Pelosi and Reid.