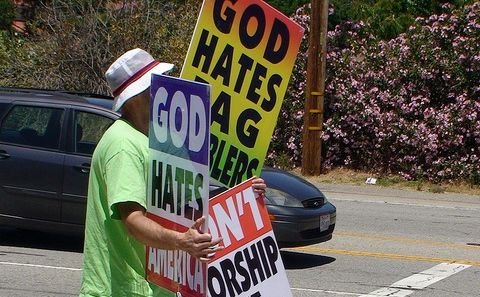 By Marc Seltzer; originally published at care2.com on October 18, 2010
. . . .
Last week the U.S. Supreme Court heard oral argument in the case of a Baptist Minister who claimed that his first amendment right to free speech entitled him to protest at the funerals of U.S. military service men and women. The case follows roughly in line with those that have accorded the greatest possible freedom to Americans who make public political statements — in this case, “God Hates You,” and “Thank God for Dead Soldiers” — however offensive.

However, unlike past cases that evidence a strong bias towards free expression in the public forum — for example, Neo Nazi marchers in Chicago, demonstrating in the streets, or the pornography of Larry Flint, published in print — the anti-homosexuality protests of the Westboro Baptist congregation disrupt private sacred rituals.

Not just in the United States, but in cultures far and wide, reaching back as far as archaeological evidence exits to document, burial rites have been among the most profound of human traditions.

Is there a slippery slope worry? Stop someone from protesting at a funeral today, and tomorrow they will be blocked from picketing in front of a factory or speaking on the steps of city hall?

I can think of nothing so precious — save maybe the moment of birth of a child — as the solemn ritual of family and friends gathering at graveside or place of worship, to eulogize, show support, to weep and to say goodbye to loved ones. To disturb people in either of these situations — and to use the Constitution to do so, is unacceptable.

It is not the type of speech which stands out here, it is the inappropriate context. Grief is not a public forum but a private rite. To undertake the necessary process of grieving requires not just the support of community but the immersion in the experience of loss. The funeral, however constituted by cultural tradition, leads us through both a conscious and unconscious transformation.

This sacred space must be preserved.

(For more on this story, including notes on the questions asked by new Justice Elena Kagan, check out my October 9, 2010, podcast review of the legal case Snyder v. Phelps at SupremePodcast.com)

January 12, 2011 UPDATE:  Following the Arizona shootings of January 9, 2011, the Arizona legislature unanimously passed a law barring protests in the immediate vicinity of funerals.

No Tea Party in Canada

By Marc Seltzer; originally published at care2.com on October 13, 2010

. . .
Democrats seem bewildered by the strength of the Tea Party movement.  Powerful incumbent Senators such as Boxer (CA) and Reid (NV), and numerous House Reps in leadership positions find themselves in difficult contests. Republicans are poised to gain significant numbers in the legislative branch in November’s mid-terms election.

Fighting back, Democrats and their supporters have gone after Tea Party-Republican candidates, focusing on their oddities, inconsistencies, and lack of coherent policies.  Rachel Maddow, among others, has exposed the remarkably poor caliber of some candidates propelled by the Tea Party to victory in the Republican primaries.

Be that as it may, the legitimate complaint of the Tea Party movement has not been effectively dealt with by Democrats.  The root groundswell of anti-government energy comes from fear and anger about deficit spending and debt.

In Canada, governments of the past decade worked hard to erase the substantial deficits of the 1990s.  When the 2008 financial crisis arrived, Canada was able to face the recession with sound economic fundamentals.   Increased public spending in 2009 and 2010 again created deficits, but helped Canada recover nearly all the jobs lost in 2008.  Embarking on a new deficit spending program did not faze the public, and Canadian leaders are now talking about returning to surplus budgets in the next 7 years.

There is no tea party movement in Canada.  National health care, yes.  Major tax protests, no.

For all the things wrong with aspects of the Tea Party movement, from blaming the Obama administration for current ills to dredging up misguided social views, the truth is that the U.S. would have braved the recession far more effectively if it had had a budget surplus.

In not addressing this aspect of the financial health of the nation directly from the start, with a coherent long-term plan, the Democrats have allowed the opposition to bundle legitimate disapproval of the government’s budget outlook with generalized anger at banks, unemployment, the Bush administration, Congress, taxes, and government spending.

It’s working for Republicans so far, and if this election looks bleak, imagine Sarah Palin filling a stadium near you in 2012.

(Marc Seltzer has been on paternity leave after the birth of his daughter in June.  Marc can also be heard reviewing U.S. Supreme Court cases at SupremePodcast.com)

Originally published on March 5, 2009, at politicsunlocked.com

The memory of the Boston Tea Party was revived last week as Americans in more than thirty cities gathered to protest financial and automobile bailouts, record-breaking stimulus spending, and Democratic leadership in general. Street demonstrations like this are something new, as far as the financial crisis is concerned: both the current and the former president’s actions have inspired anger and mistrust among some, but until now, that dissatisfaction had registered mainly in polls, man-on-the-street interviews, and letters to Congressional offices.

Now, though, a more visible movement appears to be underway. Beginning with calls during Januaryfor a mass-mailing of teabags to government leaders, and later with a series of small public protests around the United States in February and scheduled through at least July 4 of this year, organizersare channeling frustration and fear into protest.

The original Boston Tea Party, in 1773, was an action against British colonial authority over the American colonists. Colonists rejected British control of trade and taxes and argued that taxation without parliamentary representation was unlawful. In protest, colonists dumped a substantial quantity of highly valuable British tea into the harbor. The event angered the crown and united colonists in solidarity against perceived injustice of the crown’s authority.

Current anger over the burden of taxation and fears about the squandering of public funds have made the Tea Party an apt reference point for present-day protest organizers. A group called the Political Exploration and Awareness Committee PAC appears to have played a central role in scheduling and promoting the recent spate of tea parties. The group, whose website was initially full of laudatory references to CNBC correspondent Rick Santelli, has since clarified that Santelli has nothing to do with the site or movement, though their sentiments seem to be aligned. (Santelli was lately made famous for his February 19th on-air tirade about the bailout plan, in which he exhorted a Chicago trading floor, “How many of you people want to pay for your neighbor’s mortgage that has an extra bathroom and can’t pay their bills? Raise their hand.”)

The tea mail-in campaign hasn’t netted extensive news coverage, but a number of the recent protests have gotten write-ups — particularly the larger gatherings, like the crowd of about three hundred that congregated in Atlanta last Friday. Several journalists and bloggers have called into question the grassroots authenticity of the protests, alleging that they may have been financed, organized, and publicized, to an unknowable extent, by professional conservative advocacy groups or corporate interests with ties to same.